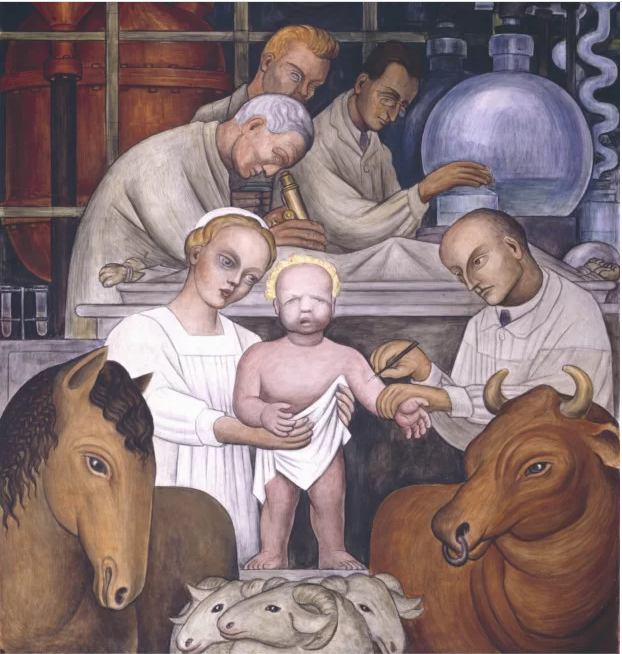 The above 1932 painting (a large fresco on the North Wall of the Detroit Institute of Arts) by the great Mexican muralist, Diego Rivera, was controversial because some members of the Christian faith thought it was sacrilegious. They thought Rivera was making a mockery of the Nativity Scene—with the child representing baby Jesus, the mother (or nurse) being Mary, the doctor being Joseph, the animals representing the stable animals, and the three scientists in the background representing the three wise men.

Supporters of the painting (who tended to be more progressive, more liberal-minded citizens of Detroit) believed that Rivera was appropriately honoring the wonders of medical technology—in this case, specifically, the potential of vaccines to save Humanity from life-taking diseases. The offended Christians wanted the fresco to be destroyed; Rivera’s supporters insisted that it be saved.

Although Rivera, himself, said that he was simply honoring medical technology, it is conceivable that he was either surreptitiously or subconsciously and unknowingly also issuing a warning—that humans must remain humble and not fall into the hubristic trap of thinking their medical discoveries, and the discoverers themselves, represent the new divine “Saviors” of Humanity. In that regard, it is interesting to note that the five adults in the painting appear to be quite satisfied and convinced that they are doing the right thing, while only the young child seems to have doubts.

Incidentally, although Rivera is said to have modeled the child after the Lindbergh baby (who had curly blond hair), the child’s facial appearance resembles that of Rivera.

The fresco was not destroyed. Ninety years later, this fresco may still be viewed on the north wall of the Detroit Institute of Arts, where it continues to provoke thoughts about vaccination. 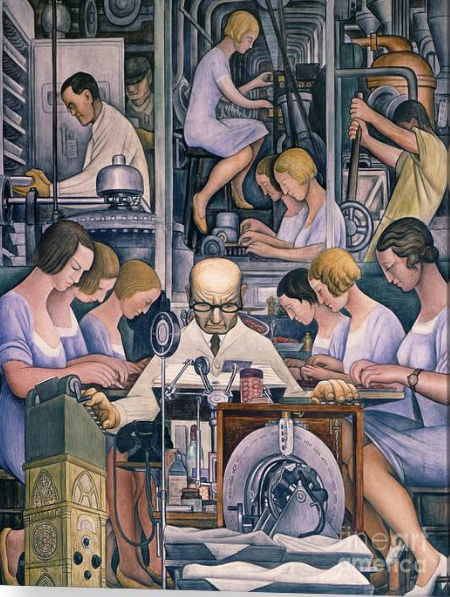 Above is another Rivera fresco (1932) in the Detroit Institute of Arts. It is based on Rivera’s tour of the Parke-Davis pharmaceutical plant in Detroit in 1932 and is believed to represent a tribute to the pharmaceutical industry. It is conceivable, however, that it, too, is intended by Rivera (intentionally, or otherwise), at least in part, to convey a warning—about the potential to become too single-minded, too trusting, and too unquestioning, regarding the wonders of the pharmaceutical industry and its new products. It is unclear whether the gentleman in the foreground is entering scientific data or adding up profits.

Parents and physicians might want to take into account that: In 2021 Pfizer made nearly $37 billion in sales from its COVID vaccine. Pfizer’s overall revenues in 2021 doubled to $81.3 billion. Pfizer anticipates record revenues of $98-102 billion during 2022. In 2009, Pfizer was ordered to pay $2.3 billion for illegally promoting and making false claims about four of its drugs. That represents the largest health care fraud settlement in history,

In 2004 Pfizer pleaded guilty to two FDA violations (committed by the Warner-Lambert pharmaceutical company before Pfizer bought the company) and paid $430 million in a Department of Justice (DOJ) settlement—for illegally marketing the drug Neurontin for unapproved purposes, “even when scientific studies had shown it was not effective” for those purposes. It was concluded that the company had manipulated data and had misrepresented or suppressed negative findings regarding the drug’s effectiveness.

In 2021, lawyers who were concerned about the safety and actual efficacy of Pfizer’s COVID vaccine, filed a FOIA (Freedom of Information Act) request that would require the FDA (Federal Drug Administration) to release all of the data (a total of 451,000 pages obtained from Pfizer) that the FDA relied upon to grant licensure of Pfizer’s COVID vaccine. In response to this FOIA request, the FDA asked a federal judge for permission to make the public wait until the year 2096 (75 years) before all of these 451,000 pages would be released. The FDA was willing to release no more than 500 pages per month (500 x 12 months x 75 years = 450,000 pages).

The above is a report of the number of deaths and other adverse events that were spontaneously and voluntarily reported to Pfizer during the first three months after their COVID vaccine was first made available. The vaccines were initially shipped around the world on December 1, 2020. Cumulatively, from December 1, 2020, through 28 February 2021 (3 months), there was a total of 42,086 case reports of individuals who had experienced adverse events associated with their vaccination (25,379 medically confirmed and 16,707 non-medically confirmed). These individuals reported a total of 158,893 events. Most cases (34,762) were received from United States (13,739), United Kingdom (13,404) Italy (2,578), Germany (1913), France (1506), Portugal (866) and Spain (756); the remaining 7,324 were distributed among 56 other countries.

Unfortunately, we do not know how many total people had received vaccination by February 28, 2021. (That information is apparently redacted.)

Despite 1223 reports of vaccine-associated deaths, Pfizer concluded that: “The data do not reveal any novel safety concerns or risks requiring label changes and support a favorable benefit risk profile of the BNT162b2 vaccine.”

Their report did not provide any detailed information about the 1223 fatalities. There was no information as to whether these 1223 fatalities were even investigated to obtain further details. The report provided no details as to the age distribution of the 1223 fatalities, or whether it was determined how many of the 1223 fatalities could convincingly be attributed to the vaccine as the cause of death (as opposed to death being unrelated to the vaccination). No details were provided as to the timing of the deaths in relation to the date of the vaccination. No information was reported as to the presence, absence, or nature of co-morbidities in those people who died. No information was reported as to the primary cause of death in those who died. There was no mention in the report of Pfizer planning to collect any further details, like those just mentioned, or being asked by the FDA to eventually report such details. Apparently, neither the FDA nor Pfizer were interested in knowing these details. Pfizer’s only plan was to continue filing the spontaneously reported adverse events.

As mentioned earlier, no data were provided, regarding the total number of people who had been vaccinated as of February 28, 2021. That is, we have no idea what the denominator was for the 1223 fatalities reported. Also, since these data depended on spontaneous reporting (as opposed to mandatory reporting), we have no idea whether this number of 1223 represents 100% of those who died in association with being vaccinated, or only 1% of the actual fatalities associated with vaccination, or somewhere in-between. The report did not indicate any plans to determine the denominator or the extent to which the 1223 fatalities represented an under-reported number. The report did not mention any need to shift to a mandatory reporting system. Apparently neither the FDA nor Pfizer were interested in these details.

One would think that reports of 1223 fatalities within the first 2-3 months after roll-out of the vaccine would have raised alarm and prompted: a shift to mandatory reporting (including retrospective reporting, not just prospective reporting); further, detailed investigation of all reported fatalities; determination of the denominator (the total number of people vaccinated); and at least a temporary halt to the mass vaccination campaign, until the just-mentioned details could be collected and analyzed. But neither the FDA nor Pfizer saw any cause for concern; any reason to even temporarily halt the campaign; any reason to collect any further details about those who had died; or any reason to determine the extent to which the 1223 represented an under-reporting of reality. Apparently, neither the FDA nor Pfizer were interested in these details.

Despite the above data, Pfizer, the FDA, the CDC, the NIH, the WHO, and the conventional news media have seen no cause for concern, no need to even report this “confidential report” to the public, no need to even collect accurate detailed information (retrospectively or prospectively). This information would not even be available today, were it not for the FOIA request.

The above track record of the Pfizer pharmaceutical company (and the FDA) raises the possibility that Diego Rivera may well have been sending prescient warnings with the two frescos he painted for the Detroit Institute of Arts—90 years ago.

ACKNOWLEDGEMENT: I would like to acknowledge the enormous contribution Dr. Geert Vanden Bossche has made to global understanding of the COVID situation. Much of my personal understanding of the COVID situation is based on his deep scientific insights. I would like to thank him for his review of this document and his helpful comments, regarding it.